Gatsby: The Great? or Not so Great?

"Take me back in time maybe I can forget;
Turn another corner and we never would have met.
Would you care?" -George Michael

Posted by Wondering Wandering Soul at 5:08 PM No comments:

Starting to Take it Personal

Have you ever just had shit go so wrong for so long that you start to think a target is on you? I have been having some strange thoughts lately, like perhaps someone put a curse on me, or I was a monster in a previous life and am paying for it now. Even more horrifying, I've started to get a strong sense there is no "God" at all, which leaves me with an eerie feeling of emptiness and meaninglessness. After a solid year and nine months of rolling the dice of life, I have found I've hit brick walls at each and every turn. My friends, as good friends should, have been staying positive along the way, telling me to hold on and keep breathing. Good things will come soon. Well, now I know I'm in trouble cause they are finally stumped. After the last bit of bad news, I was met by a long silence on the phone with each of them, followed by a scramble to try to find something positive to say, and ending with a flat out, "wow,that sucks." Now I am starting to take things personally.
Before the proverbial shit hit the fan, life was good. After a turbulent time in my 20's, filled with heart ache and health issues, I finally figured out who I was. I learned how to life custom fitted to my personality, spirit and quirks. Each night I went to bed in beautiful Southern California with a peaceful mind and a healthy body. In the morning, I awoke with a smile as the sun shone into my bedroom and my cat jumped on my bed excited that I was up. I loved my job, I appreciated my friends, I noticed the miracles of nature and I took pride in owning my own place. I had embraced a deeply held belief that it would make the world a better place if I were kind and caring towards each and every person I encountered. I walked around most days with a big smile on my face, a radiant aura and I constantly stopped to "smell the roses."
And then the storm began. I was deeply betrayed by someone who went to great lengths to assure me he truly loved me. I lost my condo, and soon after I lost my good health. Now facing a life time of a debilitating and chronically painful auto-immune disease that has developed, I find myself spending most days lying in bed (in my parent's house in NY) in agony. Doctors have tried at least 20 different medications and therapies and symptoms just continue to worsen and become more complicated. I feel completely isolated, massively depressed and just keep breathing in hopes of the Universe throwing me a bone here sometime soon. I go to bed each night thankful I get to escape the pain of consciousness for a few hours, and I awake each day bracing myself for another impossibly painful lonely day.
Having a lot of time to think, the realization of all the suffering in the world has really hit me. My suffering is great, but in comparison to good people who are being abused, tortured, those who are starving, dying and crippled with worse diseases than mine, I have it lucky. So what is the lesson here folks? We are fed this line in life that adversity is the path to building character and a deep appreciation for the good things in life. Well, what I'm wondering is was I a person that the Universe decided needing to greatly improve my character and integrity? Are all the good people in this world who are suffering also in dire need of some enlightenment by way of agony? I think God's Intel is about as accurate as the recent CIA debacle. I'm sure all of us could provide a list of others that could really use the character building lessons. I believe I was in a great place spiritually, mentally and physically in life. I was a good person seeking further enlightenment through experiences with other amazingly spiritual friends and acquaintances. Is all of this pain in the world really necessary?
At this time I don't have the answer to that. Maybe in time I will look back on this hell on Earth experience and see why it had to happen to me and to others. Truly, I hope that one day the mystery of life as we know it is revealed to me and I have an "ah-haaa" moment. I pray that all of our hardship isn't in vain. But for now, I admit, I am starting to take it personal.

Posted by Wondering Wandering Soul at 7:19 AM No comments:

"Character is who you are when no one is watching." I read that quote a couple of years ago and it hit me hard. It was like a light bulb went on inside, and I really got the meaning of the word in every fiber of my being. I was wondering, do you ever wonder what is actually real in this world?
This topic has been on my mind a lot the last couple of years. Sometimes I wonder if anything is real at all. But most of the time I marvel at my experiences with other people, people I thought I knew and that I thought I could trust. I'm certain every adult has been betrayed at some point or another, and I also know some people have been betrayed more deeply and more frequently than others. My heart goes out to each and every one of you that has struggled with this painful issue.
I'm kinda on this quest in the world. I wasn't able to put it into words until recently, but basically, I'm searching for something real and true in this crazy place. I've been left very frustrated in my searching so far. You know, frustrated doesn't cut it. Try sick, depressed, disgusted, bewildered, deeply hurt and angry. I have many personal experiences to speak about and a million others of friends and acquaintances as well, that seem to keep proving to me that human beings, in general, are seriously lacking in character. It seems there are lies covering lies covering cowardice, and I'm not sure anymore if there is anything of substance underneath it all.
My hope is to find someone who knows who they are and tell the truth about it. And avoiding telling the truth counts as a lie in my book, just so we're clear. Is that so difficult to do? Are other people out there desperately looking for something authentic and real as well? Am I all alone in this? I can honestly say that I know who I am when no one is watching, and it is the same as when others are watching me. I can truly say I have developed an excellent character through much adversity, but I am left wondering if that even matters at all in this society any more. Please tell me if I am all alone here.
Posted by Wondering Wandering Soul at 3:45 PM No comments: 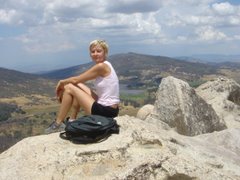